Lent 1 February 18: The baptism of Jesus 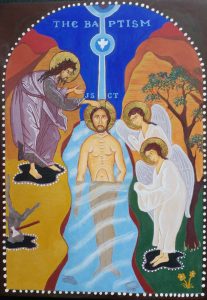 It is only two weeks since the Baptism of Jesus was the Gospel reading. Then it was seen as an epiphany, leading to the climax for the season of Epiphany, the Transfiguration.

Today, the Baptism is linked to the Temptations of Jesus, and marks the beginning of the ministry of Jesus. The emphasis is on the opening of the heavens, the descent of the Spirit (dove) and the words of the Father “You are my Son”. (This is an important text for the doctrine of the Trinity.) The Spirit drives Jesus into the wilderness, the abode of Satan, for a confrontation with evil. Mark makes no mention of particular temptations. Instead Mark announces that the victory over temptation leads to Jesus proclaiming the good news that the Kingdom of God has come near, as promised in the opening words of the Gospel (Mark 1:1).

At the Baptism, the heavens were “torn apart”. Mark uses the same word at 15:38 to describe the curtain of the temple being torn apart as Jesus dies. The dove evokes Genesis 1:2 where, in the old translation, “the Spirit moved upon the face of the waters”, and also Genesis 8:11 where the dove brings evidence to Noah that order and peace are restored after the flood.

In this icon (an original composition) Jesus is naked because he is stripped of his heavenly glory. He has “emptied himself” (Philippians 2:7). By becoming fully human, he clothes humanity in a garment that is incorruptible. The angels who minister to Jesus in the wilderness are seen here bringing new clothes after his baptism. Total immersion indicates Christ’s dying (drowning) and rising again. With his right hand Jesus blesses the water, and water takes on sacramental significance. Traditional icons show evil powers lurking in the depths, such as river gods riding dolphins, but here the powers to be overcome are war and violence, represented by a tank, and pop culture, represented by a TV set. Note that on one side there is the wilderness, the scene of the temptations, and on the other a fertile paradise, with a gum tree. The mountains are taken from a photo of the Olgas. There are several aboriginal motifs, so that the whole of our Australian culture is included. The part circle at the top indicates the Father, who is eternal, but the whole circle is hidden because we do not fully comprehend the mystery which is God.

By the stripping of your garments you show humility, and we too are humbled, stripped of all posturing, and concern for our own self-importance.

By your descent into the water, you faced chaos and turbulence in order to bring us peace, assurance and stillness.

By your blessing of the water, water becomes a sacrament, offering new birth, new creation, and life from death.

By your rising from the water, and your triumph over temptation, you overcome the evil one and give hope for peace in the world.

By the descent of the dove you are blessed, and yet driven into the wilderness, where your struggle with Satan intensifies, as does ours in your service.

By the word of the Father we know you as the beloved of the living God, and we too affirm pleasure in your presence.

May your Spirit live in us, bring power to our prayers, build up your people in this place, and give us all a sense of belonging in the community of the baptised that circles the globe.

Lamb of God, have mercy on us.