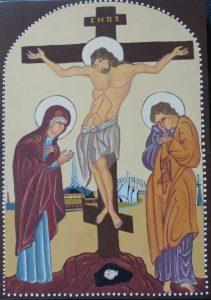 The icon of the crucifixion has been chosen today because Jesus speaks of being lifted up on the cross. (John 3:14, cf. 12:32) “Just as Moses lifted up the serpent in the wilderness, so must the Son of Man be lifted up.”

The crucifixion icon is different from a crucifix. The emphasis of a crucifix is on the suffering of Christ. Generally he has eyes open, indicating he is still alive, suffering, paying the price, building the treasury of merit. The Reformers rejected this, and instead emphasised that Christ is risen by displaying an empty cross, as at Mark the Evangelist. The Eastern Church, some 500 years before the Reformation, reacted differently. Rather than simplifying the symbol, the East added features. Christ is dead, eyes closed, body slumped, blood and water flowing. Christ’s life giving (sacramental) blood drips down on to the skull of Adam, revealed in a cave beneath the cross. (The Resurrection icon will show the risen Christ raising Adam and Eve from their graves.) While grounded on Calvary, the cross reaches into the sky, a bridge between earth and heaven. The walls of Jerusalem appear in the background, indicating that the place of crucifixion is outside the city, and therefore of a different order from that which goes on inside the walls. Mary and John are present, and a new community of mutual caring is created by the words, “Woman behold your son, son behold your mother”. (John 19:26) In John’s Gospel the crucifixion is a demonstration of the extent to which God’s love will go for our sakes. “God so loved the world that he gave his only Son…” (John 3:16) The new, caring community is to carry on this mission of Christ so that those who see Christ lifted up may be drawn to him and have eternal life. This done, Jesus says, “It is finished” (John 19: 30)

Today’s particular icon of the crucifixion is Byzantine in style, but with some Australia touches, most notably symbols of Melbourne and Sydney have replaced the walls of Jerusalem, for the death of Christ ushers in a community and a culture that is different from contemporary culture and fashion.

Father God, you so love the world that you gave your only Son.

We look not on the horror of this scene, but on the love exemplified, and in that we find glory;

Love that counts not the cost, and creates new community,

Love that offers eternal life, and draws all people.

Love in which we participate as we receive the bread and the wine, the body and the blood.

Blessed Son of God, live in us, and we in you,

Through your being lifted up, raise us from earth to heaven,

From bondage to liberation,

From despair to hope,

From death to eternal life. Amen.