These weekly “People to Commemorate” posts are a kind of calendar for the commemoration of the saints, reproduced here from a Uniting Church Assembly document which can be found in full here. They are intended for copying and pasting into congregational pew sheets on the Sunday closest to the nominated date.

Images (where provided) are of icons by Peter Blackwood; click on the image to download a high resolution copy of the image. 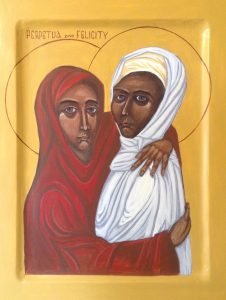 Few women have shaped the Christian spiritual tradition like the young North African martyr and visionary, Vibia Perpetua. She has inspired people of different centuries, countries, and cultures. Her story, told in The Passion of Saints Perpetua and Felicitas, is a “dazzling text”, one of the most gripping accounts of martyrdom from the ancient church.Virtually from the moment of its writing in an early third-century Carthaginian prison, Perpetua’s story has played an important part in Christian spirituality. It is “timeless”, according to the medieval historian, Joyce Salisbury, meaning that it speaks to the human heart across the centuries, societies, and cultures.

An unknown figure first saw the potential of Perpetua’s story. He framed her story in such a way that succeeding generations of readers (or listeners) would treat it almost like Scripture. He saw in her visions a demonstration of the unceasing operation of the Holy Spirit and a witness for the glory of God and the good of the Church. The popularity of Perpetua and her companion Felicitas soon spread beyond the North African church. By the late fourth century their feast day was honoured in all the early calendars and martyrologies and their names were regularly remembered in Sunday worship.

The overwhelming reason for the popularity of Perpetua in recent times is her importance for women’s religion. She gives an intimate view into the mind of a third-century woman, which, for centuries, has been a great source of inspiration for women struggling with questions of identity and meaning. Given the degree of silence that has surrounded women throughout history, Perpetua’s story is astonishingly rare and precious. She may well not be the first woman to have put her thoughts on paper; she is, however, one of the first of whom we have any real knowledge. In her writing we can hear a voice too little heard. It is an extraordinary voice. She has given the Church – especially women – a role model and a positive example of empowerment.