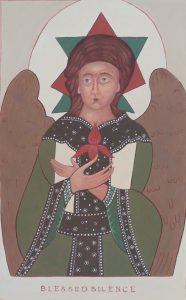 The muted tones of this icon suggest humility and peace, themes appropriate for Lent.

The eight pointed star in the halo first catches the eye. According to the imagery of Genesis, God created the world in six days, and rested on the seventh, so the eighth day is the first day of a new phase. Christ dies on the sixth day, rested in the tomb on the seventh day, and rose on the eighth day, the first day of the new creation. The resurrection on the eighth day indicates the beginning of a new dispensation. The created world can now participate in the reign of Christ. It is a foretaste of the kingdom to come, hence Paul’s phrase, “a new creation”. Not only is Christ raised, but we are raised with Christ, incorporated into Christ, in union with the Triune God. (Hence Sunday worship.) Note that Abraham circumcised Issac on the eighth day, starting a Jewish tradition that transformed into Christian Baptism. Baptismal fonts are octagonal because the baptised are entering into new life in Christ.

The complementary colours in the star, red and green, reinforce the feeling of harmony and heavenly peace. When I began painting this icon, I assumed the figure was the face of Christ. But, not only is the face beardless, there is no cruciform halo. In fact it is not clear if there is a halo at all. the more I contemplated the icon, the more the figure become a representation of redeemed humanity. Here is a person like me!

The wings are a puzzle. Sometimes John the Baptist appears with wings, because he is the messenger (“angelos” in Greek) pointing to Christ. Perhaps these wings suggest that I, in company with all the redeemed, am to be a messenger, pointing the world to Christ. He is “the lamb of God who takes away the sin of the world. (John 1:29)

The seraph reminds me of the call of Isaiah. One of the seraphs came and touched Isaiah, and cleansed him. Penitence is encouraged on Ash Wednesday. Here, the hands appear to be receiving the personal, healing approach of the seraph. “Your guilt has departed and your sin is blotted out”. (Isaiah 6:8)

The original Icon, on which this one is modelled, was created by the Russian Old Believers in the eighteenth century. When a new patriarch in Moscow set about reforming and modernising the liturgy, many objected and broke away. Their numbers swelled greatly when Peter the Great set about westernising everything, including the church, especially its art and its order.

Prayer before the icon of Blessed Silence

Be still my soul, you are safe in the presence of God.

Raised up with Christ,

A child of the new creation,

Cleansed by the angelic touch,

Let the inner voices be quelled,

Be still my soul.

You are in harmony with the eternal purpose of God,

In union with Christ

Safe in the Spirit