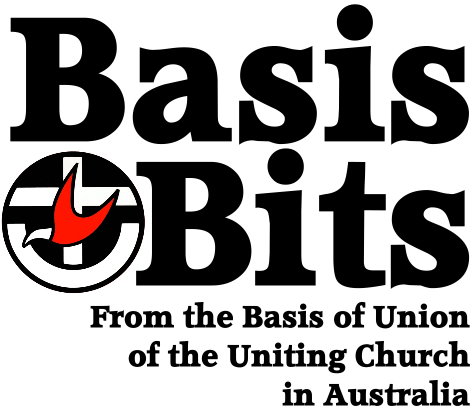 In 1977 the Uniting Church in Australia was formed through the union of three previously separate traditions: Congregational, Methodist and Presbyterian.

BasisBits are snippets from the Basis of Union for occasional in Sunday pewsheets. They might serve simply as a means of reminding your congregation of the theological ground upon which our denomination was established, or as a reference point for some aspect of the preaching or liturgy. Like our LitBits, they are a copy-and-paste resource; we hope soon to be able to be provide them in a simple JPEG format.

The BasisBits do not cover the whole of the Basis; some of the more administrative commitments in the Basis have been omitted. The full text of the Basis (1977 and 1992 versions) can be found here. The full listing of available BasisBits is below.