Lent 6 March 18: Entry into Jerusalem and the Annunciation 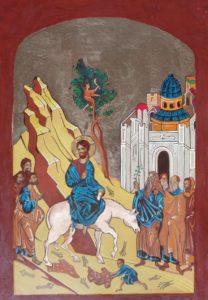 While the icon is faithful to the narrative as presented in all four Gospels, there are many additional aspects which bring out deeper meaning. The disciples and the crowd are welded into unified groups, with Christ in between, framed by a mountain and a tree. The crowd and the disciples, like the walls of Jerusalem are upright, but the tree, the mountain and the Christ figure make three parallel lines on the diagonal. If the mountain is Sinai, the old covenant, and the tree is Calvary, (as well as the tree of life in the garden of Eden and the tree in Revelation that heals the nations) then Christ is part to the Biblical message that differs from human culture, then and now. In the crowd a man points to his eyes, which Jesus healed. If it is Lazarus next to him then we have signs of the kingdom, where the blind see and the dead are raised. The turrets and pinnacles of the city are highly coloured, representing the heavenly Jerusalem, while the windows and doorways below are black, indicating the evil Jesus must endure on the way to glory. Note also that the words “Blessed is he who comes in the name of the Lord. Hosanna in the highest” have been included in the liturgy of the Eucharist at least since the Didache was written in 100 AD. 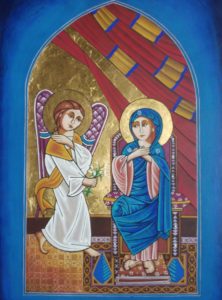 March 25, is 9 months before 25th December. Since the date of the birth of Jesus was settled, about 330 AD, the date of his conception has been back dated from that. Since the Council of Chalcedon, 451 AD, the Church has affirmed that Jesus was both divine and human from conception. This countered views such as his birth was normal and he became divine when the Holy Spirit descended on him at his baptism, or that he wasn’t really human at all, he only seemed to be. That the Annunciation should fall in Lent links the coming of Jesus to his departure. He was born that the glory of God might be seen.

The original of this icon is a contemporary Coptic one, actually photographed in the new Cathedral in Aswan where Egyptian iconographer, Ashraf Gerges, was working before the Cathedral was open to the public.

We welcome you into our city. Give us a vison of the heavenly Jerusalem in our broad, brown land.

We welcome you into our world. Come, renew the whole creation.

Blessed are you, Holy One, you come in the name of the Lord. Hosanna in the highest.