About Mark the Evangelist 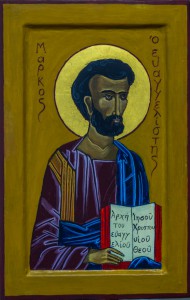 The Uniting Church congregation meeting at North Melbourne chose in 1995 to identify itself with the name and work of Mark the Evangelist. There are many saints, but there are only four Evangelists who, in the book of Revelation, are pictured in a special relationship to the throne of God. Mark the Evangelist was not amongst the twelve but he is traditionally associated with them. Mark is often identified with John Mark whose mother’s house in Jerusalem [Acts 12:12] was a meeting place for the apostles. There is a strong tradition that Mark is the young man wearing a linen sheet who followed Christ after the disciples fled, and avoided capture by shedding his clothes. [Mark 14:51-52]. Mark was a friend of Peter and Paul, and Barnabas who was his cousin. He set out with Paul on the first missionary journey but, after conflict with Paul, broke away at Pamphylia and returned to Jerusalem. A quarrel between Paul and Barnabas resulted in Mark and Barnabas travelling to Cyprus to preach the gospel. The rift was later healed because Mark is mentioned as Paul’s companion in Rome.

Around 60 AD Mark went to Alexandria, the second most significant city of the Roman Empire. It was a centre for Hellenism and contained the largest community of Jews of any city in the ancient world. It is said Mark founded the church there and became its first bishop, and may have been martyred there in the eighth year of Nero’s reign. In 310 a church was built at the place of his martyrdom but in the ninth century the Venetians removed his remains to the Chapel of the Doge, seeking power from his relics to help them in time of calamity.

Outside what we find in the New Testament we know nothing about Mark himself, except that he was “stump fingered,” a reference to the shape of his hands, not the brevity of his gospel. It is said Mark’s emblem is the lion because he begins with “the voice crying in the wilderness.” The last lion was killed in the Judean wilderness 700 years ago but in Mark’s day their roar would have disturbed the peace of the hills.

Beyond Alexandria and Venice it is Mark’s relationship with Peter and Rome that is significant. He is said to have been Peter’s companion, disciple and interpreter, and that he heard him preach. Papias, a bishop from Asia minor, and Clement of Alexandria both tell us that, at the insistence of the Christians in Rome, Mark set down accurately, though not in order, everything he remembered of the words and actions of the Lord as he had learned them from Peter. Because of the brevity of his Gospel, and the knowledge that he did not belong to the twelve, the gospels of Matthew and John had precedence over Mark in the church for many centuries. But it is now widely held that, after Paul, Mark is the first New Testament writer, that he was the first to refer to ‘the Gospel,’ and that on most occasions he does so without qualification.

The feast day for Mark the Evangelist is 25 April, Anzac Day. Each year the congregation has a special service of celebration during which we focus on Mark’s life and work in bringing the gospel of Jesus Christ to us and many others in the world.