12 June – When three equals one

An infinite number of mathematicians walk into a bar. The first one orders a pint of beer. The second one orders half a pint of beer. The third asks for half of the last order. The fourth orders half of the last order. The next orders half of the last order and so on it went. The barman pulled two one-pint glasses of beer. Gave one to the first mathematician and told the others to share the other pint among themselves. They didn’t argue about this arrangement because they knew that the halving of each order even an infinity number of times, the amount of beer would not quite reach one pint. It is when thinking of puzzles like this that I don’t feel quite so bad when I can’t get my head around the doctrine of the Holy Trinity.

The human mind likes to picture things. We make pictures of things that cannot be seen.

Mindful of our love of visualising everything, God told Moses there had to be a limit to this desire. God got Moses to include this injunction into the Ten Commandments. God decreed thou shalt not draw pictures of me. A little aside – such is our love of images that Cecil B. DeMille made a film in 1956 of the Ten Commandments. Of course, anyone who had read the Bible realised that the film missed what the Bible is about by a long shot. This is the problem. When we make an image of anything or anyone we only get a little bit of it right and most of it wrong.

And God said, ‘Thou shall not paint me!’ So what possessed me to have an icon of the Holy Trinity on the cover of our order of service? There was a season in the history of the church when painting any kind of icon was against church law. Thou shalt not paint any kind of image of God or God’s Son or God’s followers. There shall be no images. Then John of Damascus said:

I have seen God in human form, and my soul was saved… In former times God, who is without form or body, could never be depicted. But now when God is seen in the flesh conversing with humans, I make an image of the god whom I see. I do not worship matter; I worship the Creator of matter who became matter for my sake, who willed to take his abode in matter; who worked out my salvation through matter.

So the church said OK you can paint icons, but THOU SHALT NOT PAINT ICONS OF GOD THE FATHER!!! For the most part icon artists have obeyed. They have sneaked a hand poking in from the top to indicate that God the Father is causing the story in the picture to unfold. There have also been a few blatant acts of disobedience. We were visiting old churches in Mystras in the hills above Sparta and I caught a glimpse of a triangular halo. I looked closer and there was an old man with a triangular halo sitting beside a younger man with a halo traditionally associated with Christ and a white dove fluttering between them.

Other examples of this disobedience occurred in Russia despite an injunction of the Acts of the Great Council of Moscow of 1666-1667 that said, ‘To paint icons of the Lord Sabaoth (that is, the Father) with a white beard, holding the only-begotten Son in his lap with a dove between them is altogether absurd and improper…’ Sure enough, I saw an example of this indictment being ignored as late as the early years of the twentieth century when it appeared in an old photo atop an icon screen in a church built in St Petersburg to commemorate 300 years of the Romanov dynasty. The church was destroyed during the Soviet era and is now restored. The offending icon atop the screen has been replaced with one resembling the famous Rublev icon of the Holy Trinity? 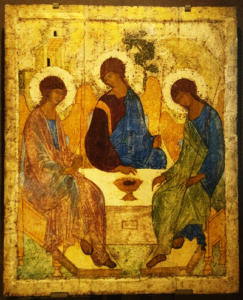 How did Rublev get away with painting God the Father, the Son and the Holy Spirit when it is against church regulation to paint God the Father. He got away with it by painting the three messengers from God who visited Abraham and Sarah to announce they were going to have a baby who would be the father of a nation. He wasn’t the first to paint this bit of scripture. Early versions go back to the early fourth century. Some of us have been to Ravena and seen a mosaic of the story from before 547 CE. Over the centuries some artists put the same kind of halo over the central messenger as was usually given to Christ. In others, Christ’s halo surrounded the three heads – they were interchangeable. There were many other variations to the image according to the imaginations of the artists. In many, Abraham and Sarah were still present bringing food to the visitors.

Theologians, poets, musicians, ecumenical church councils have joined with artists to help the church say what there is to be said and sung and seen about who God is. We know that human minds and senses are way to puny to begin to grasp all that God is. God reveals God’s self to humankind and, by God’s grace, we can see and hear and feel God with us. But if we ever imagine we have perceived it all we are kidding ourselves and our god is much too small.

And yet, on Trinity Sunday, the church pauses to grapple again with this great mystery that the omniscient, omnipotent, invisible, and all other superlatives that might be associated with God and wonder that this God cares for us. It is a kind of genius that prompted the church to abbreviate what it can know about God into statements we call creeds that describes one God as three persons.

When Rublev painted his icon of the hospitality of Abraham, the Russian church decreed that icons of the Holy Trinity would henceforth be modelled on the one painted by Rublev. The church recognised that of all the attempts to paint or sing or describe God, Rublev had got some things right. I will mention only two. Firstly, the table the three are sitting at with a chalice looks remarkably like every communion table or high alter where the Eucharist is celebrated. There is also a space at this table, a place where the worshiper may join in fellowship with the three who are in eternal unity.

Of course all these attempts to understand God are too small. In his hymn, King of glory George Herbert concludes his praise with the line, ‘ev’n eternity’s too short to extol thee’.

In my student days, a visiting theologian from America told of his late-night conversations with a fellow theologian as they grappled together with the mystery of God. He explained that what they had to say on the subject was never complete but always came to a halt, whereupon the host put his recording of JS Bach’s B minor Mass on the turntable and played the Credo, Credo in unum Deum (I believe in one God). No more words. No more argument to finds no winners or loser. Just time spent together enjoying a great artistic composition celebrating God.

On Trinity Sunday the church grapples again with the mystery of God. On every occasion when the liturgy of the church celebrates the Eucharist the worshiper is met again by the mystery of the Holy Trinity in the recitation of the creed and receiving the body and blood of Christ at his table.